It’s been about 2 months. The news isn’t by any means new. But the impact is no less diminished. The passing of Dame Zaha Hadid rocked the architectural community and to a larger extent, the design world as a whole. To recap the details of her passing would be overtly redundant since every major news source from BBC to The New York Times has covered it. Reputable architecture websites such as ArchDaily and Dezeen have also already dedicated numerous articles to her and her work since then.  Yet what each of those sites lacked, from what I can gather at least, was a personal account of what Dame Hadid meant to one given person. Yes, her work is world renowned as groundbreaking, memorable and pushing the boundaries of what architecture could and should be, but how did she affect her students? The people she met during crits; her coworkers; those who interned with her; or in my case, those who were neither of the aforementioned things, but still had the fortune of meeting her, if only once?

From the days of my undergraduate studies at Howard University, I was always – and still am – a massive fan of Zaha’s work. Granted, I was in undergrad long after her breakthrough drawing “The Peak”, for at that point she already had numerous built projects under her belt and her name was as “household” as any other.

Thus I had a plethora of her work at my disposal thanks to the school’s library, but if I’m to be honest with you and myself, it was really thanks to Google. Regardless, I tried my best to understand her techniques. To study her theoretical reasoning, purchase her books and even emulate her graphical style. All of her work was simply fascinating to me. My graduating thesis, though not based on anything Zaha had previously done, was heavily influenced by her early sketches.

Her ability to transform the ideas she had on paper, into actual, (arguably) functional pieces of architecture was something to aspire to and be inspired by. But beyond her aesthetic was the way she spoke of her work, the confidence she carried, the almost unapologetic way she presented her ideas, those were all things that I, as a young architecture student, looked towards. This was a woman who was fearless in her convictions.

What I wouldn’t give to have known her when she was younger. I’m pretty sure with her no-holds-barred attitude and raw assertiveness, she was constantly the life of the party.

When I left undergrad in DC, I moved to New York and worked for a small firm. At the time, one of my former classmates was attending Columbia University’s GSAPP to obtain his masters. Knowing how much I was, I suppose ‘obsessed’ would be a good word, with Zaha, he did not hesitate to call me when he found out she was to have a lecture at the school. Needless to say, I promptly informed my boss that I would be missing work that afternoon as I made it a point to go see her. Upon arriving at Columbia, those of us who weren’t students nor staff were designated to satellite rooms in order to see her lecture. While disappointed, I couldn’t be upset, for to simply be in the same building as her, to hear speak live, was something that I had dreamed of since the first day I saw her work. Yet I was not to be deterred. When the lecture was over I immediately rushed to the main lecture room and talked my way pass the security guard (yes, there was a security guard) so I may go see her in person. After waiting a couple minutes for her to finish talking to a small group of students, I made my way to her and introduced myself. After brief pleasantries I asked if she had any advice for an aspiring architect coming straight out of undergrad. What she said to me, though so simple, and so cliché, had a lasting effect on my personal and professional self:

“Work. Work and work some more. Nothing will come if you don’t put the work in.” – Zaha

As I said, so simple. So cliché. Yet so profound.

I remember looking at the faculty and her peers who were still standing around and they were all smiling at me. When I told the story to my friends later that night, week, month, I was given responses such as “oh ok, cool” or, “that’s nice.” What they failed to understand was how much that meant to me. How much that changed me. It was like words from a sage, and in many ways, it was. Today, Zaha Hadid is known as one of the greatest Architects (capital ‘A’ in the most sincere of ways) to have lived. But for all intents and purposes, she was an Iraqi-born, woman, in one of the most male dominated professions to ever have existed. And if you underestimate how much she’s broke down barriers, you haven’t done your research.

Zaha had put in her work.

Now it was time for me to do the same.

Admittedly, I was growing complacent at my job in New York. Did I love it? No, but I was comfortable. I was making enough money to go out, drink and have fun with my friends, but I was going nowhere professionally. After my encounter with Zaha, things changed. The next year I was accepted and attended Columbia University’s GSAPP, because of course I did. While I was attending school there, I visited Beijing and toured her Galaxy Soho complex with a new appreciation for her architecture.

When I entered the work force again I kept on working. Don’t get me wrong, I’ve been having fun as well, but while I’ve been doing that I’ve never forgotten that nothing will come if you don’t put the work in. It’s perhaps for that reason that I’ve been so invested in making Whisky + Architecture work. Hell, a quick look through this website and you’ll see at least 3 articles dedicated to her work, as well as her imagery all over our Instagram. You can say she’s just as part of Whisky + Architecture as I am. Or maybe I’m just being too meta. Who knows? What I do know is that I wouldn’t be the same person I am today without Zaha, a woman I only met once for no more than 10 minutes.

So with that I just want to say “thank you Zaha.” I’m sure I’m far from the only person who’s been affected by you in such a positive way. I even have coworkers and friends who studied under you and they’ve given me their accounts as well. But I would be remiss if I didn’t express how much you meant to me. You were, and always will be, my favourite Architect. 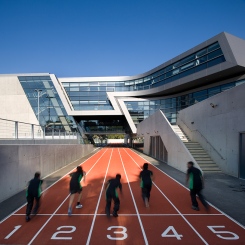 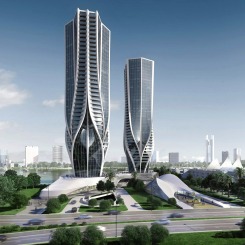 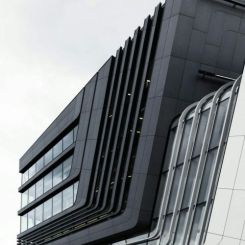 3 thoughts on “Thank You Zaha”