I’ll be the first to admit, among all the whisky that I have tried to encounter so far, I have yet to go into the catalog of Dewar’s. Silly me, I’ll also be the first to admit, that I made a mistake. Dewar’s White Label is actually a scotch that I was introduced to early on, before I knew what scotch was, as it is a great whisky to have in cocktails or when you’re young and downing as much as you can at a party. So Dewar’s should have been a brand that I flocked to once I got into more mature whisky consumption since I was aware of it early on, right? I have no excuse. I don’t know why I never did, or why it has taken me this long to revisit Dewar’s, but most of the credit goes to the great brand representatives and ambassadors that gave Chicago a special evening a few months ago. Dare I say, they provided me another Night in Chicago…

I’ve been to some pretty great nights in Chicago related to my whisky explorations but this night hosted by Dewar’s was truly something special.

Here’s the run down:

1.Dewar’s was having their last stop on their Dewar’s Dinner tour in Chicago and Whisky + Architecture was invited. I’m in.

2. The dinner portion of the night consisted of 5 custom dishes with each course being paired with a brand under the Dewar’s portfolio. I’m in.

3. Of those whiskies, some of them would be ‘rare and unreleased single malts’. I said I’m in.

4. The 5-course meal would be handled by the great Michael Voltaggio (@mvoltaggio), who, if you are not aware, just happens to be the Season 6 winner of  Bravo’s acclaimed Top Chef series. I SAID I’M IN ALREADY!!!

5. It was to be held at the SOHO House Chicago. Now they are just showing off. 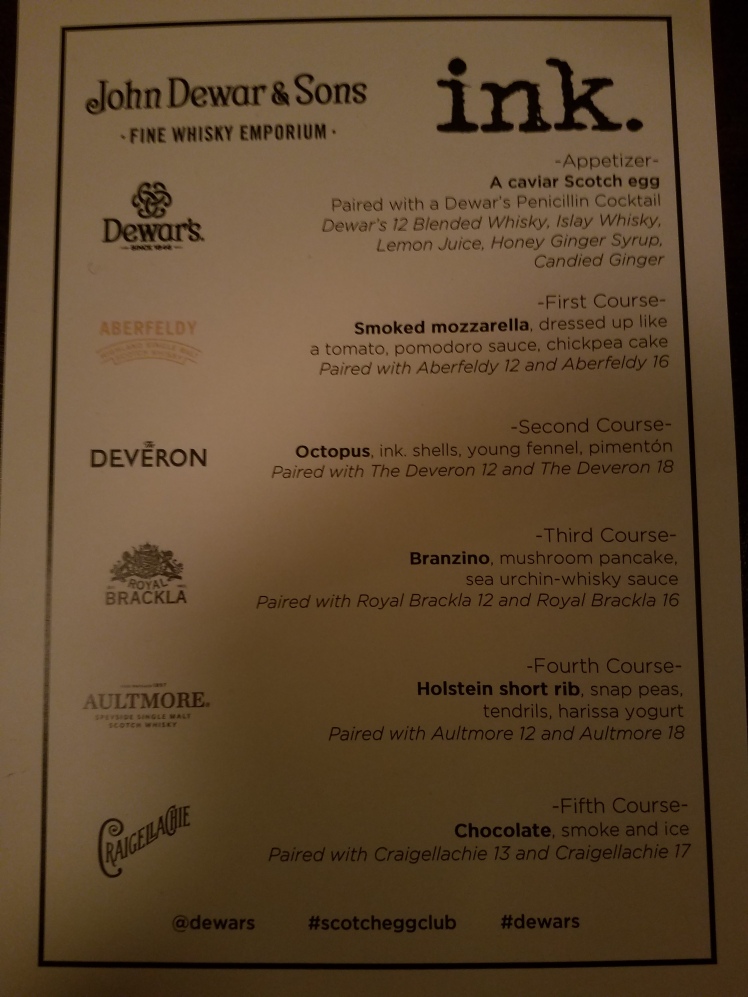 As you can see, the lineup was impressive, but embarrassingly, Aberfeldy was the only brand I have had other than the Dewar’s. How could I have gone this long without trying some of these? I haven’t even seen Royal Brackla before. Luckily, I was about to be highly educated in this more-than-welcomed crash course in all things Dewar’s.

The 12 Year is one that I have had many times and, usually, keep around the home. It is a perfect everyday whisky that is floral and sweet enough to have you keep coming back for more but refrains from feeling like it is light. You know you are drinking scotch, but you don’t feel like you are growing a beard either. Paired with the tomato and smoked mozzarella, the fruitiness really shines through and the crispness of the dram cuts through the creamy texture of the plate. 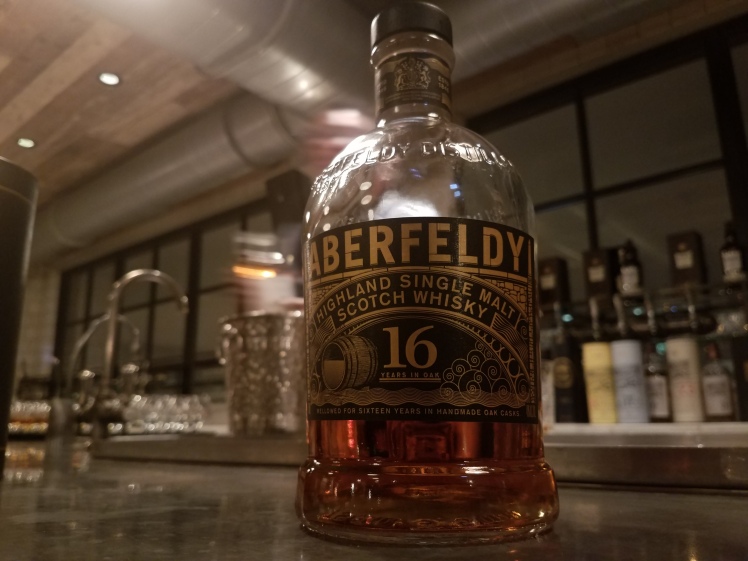 The 16 Year is one that I had yet to have and was delighted to crack open. In true maturation, the 16 doesn’t stray far away from its younger sibling but becomes more refined in the characteristics that I enjoy the 12 for. The 16  year does get a bit of sherry influence but not on the level to dub it a “sherry bomb” at all. It adds more of the general fruit taste that was in the 12, bringing on more of the caramel, honey and floral flavors.

The Deveron line may have been the most intriguing of the evening.

The 12 Year is light and very easy to drink, but didn’t strike me as an “everyday whisky” I am still trying to decipher why, but I keep drawing a blank. The 12 gave me the first citrus flavor of the night in addition to some spiciness that formed a very diverse tasting experience. The Deveron also doesn’t have a crisp feel but rather leaves a moistness more than common…we are talking about liquid here.

The 18 Year paired with the grilled Octopus just may be my favorite pairing of the evening. Continuing from the 12, the 18 now adds toffee characteristics to the discussion which longs for something charred to accompany it.  The overall experience is very easy to handle where even the finish is an abrupt one and doesn’t linger too long at all.

Look, any whisky with “Royal” in its name has to be good right? The story of The Royal Brackla goes something like this: “Royal Brackla was founded in 1812 near the world famous Cawdor Castle in the rich and fertile land of the Moray Firth, known for its traditional country sports and thriving wildlife. [Captain Frazier] found that the wind the rushed through this area makes the best barley in Scotland, and the way he takes advantage of this barley is by turning it into spirit. The Cawdor estate provides the water
source for distillation. Known as The King’s Own Whisky and the first royal distillery, it was the first single malt to be granted a royal warrant by King William IV in 1833 and is often called “the drink divine.” [King William IV] has this whisky and thinks it’s the best whisky he has ever had and orders Captain Frazier to send a number of these kegs of whisky down to the Royal Family in the UK so that they can enjoy it there as well.” – Royal Brackla & North America brand ambassador, Gabriel Cardarella. Fermented for 80 hours, instead of the more average 50-hour span, the sweetness really comes out, and then they finish it in first fill sherry casks.

Did I say sherry bomb? Royal Brackla is a Manhattan Project level brand when it comes to sherry flavor. How I never came across these beauties escapes me. The 12 Year is just what the doctor ordered for those who enjoy sherry finished whiskies but don’t want the thickness that accompanies those drams. It is a great introduction into real sherry finished whiskies and one that won’t be too intimidating. Light, and a little spicy…we are drinking now!

The 16 Year: Check, please! I’ve found my star of the night so far. Now we are talking sherry! Paired with the hearty mushroom and sea urchin pancake, this a hearty meal to make you feel all warm inside. Like the 12, this edition is finished in first-fill oloroso sherry casks but the flavors are rightfully intensified with the spiciness being less evident, while the whisky becomes thicker. This is a sherry bomb. A lovely one at that.

The 21 is: Whoa. This is a blast of robust sherry, which gives off a chocolate and berry taste that is more than made to keep one company during the winter season. I’m not sure if I like the “best of 3 worlds” that is the 16 Year or if I prefer the unapologetic sherry blast of the 21 more but I can’t go wrong with any of these. Just look at that dark amber color!

Here, in my opinion, is the consensus favorite of the night. Aultmore, provides what Aberfeldy does in being approachable, but with a more sophisticated, matured offering. This can keep me and I figure anyone company. This isn’t too sweet though it is floral which is very interesting to the tongue and is very light and crisp. What is also appreciated is that it is NCF (non-chill filtered) which keeps this sharp. One cannot go wrong by having this in their collection.

23 Years you say? This smooth ride continues the trend of floral notes for the night but adds a bit of vanilla fudge to the equation. A very mature and easy to drink whisky, this is one to bring out on a special day that you would love to share with a group of people. The spicy flavor accompanies the aforementioned tastes to make a stand-up dram, but this edition maybe the first one where I feel that whisky taste that often scares new whisky drinkers. 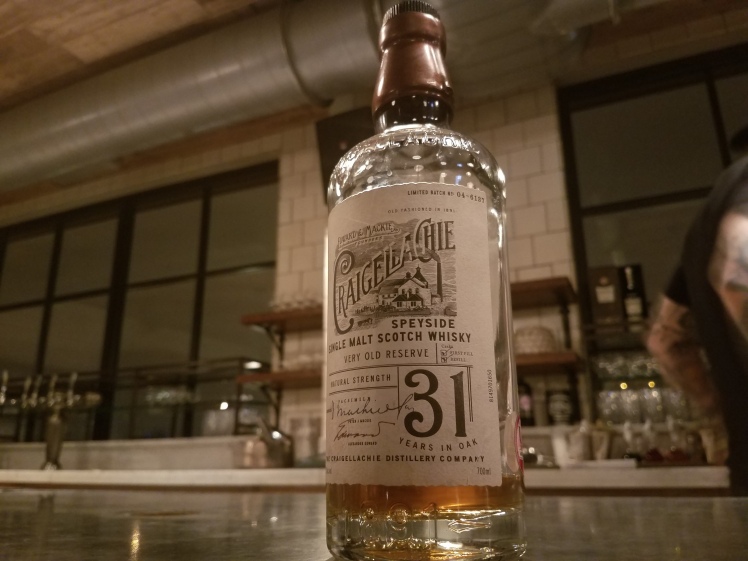 Boom! The rarest of the night! 31 years of age. Everything I said about the 23 Year, but more…and with some sherry influence. Nuff said. Intense. The finish on this thing is just about as long as it’s age statement, which allows you the taste how much more polished it is than the admirable 23. This is the definition of a well rounded whisky. I will say that I preferred the 23 Year more, for the balance of complexity and smoothness it had in comparison. 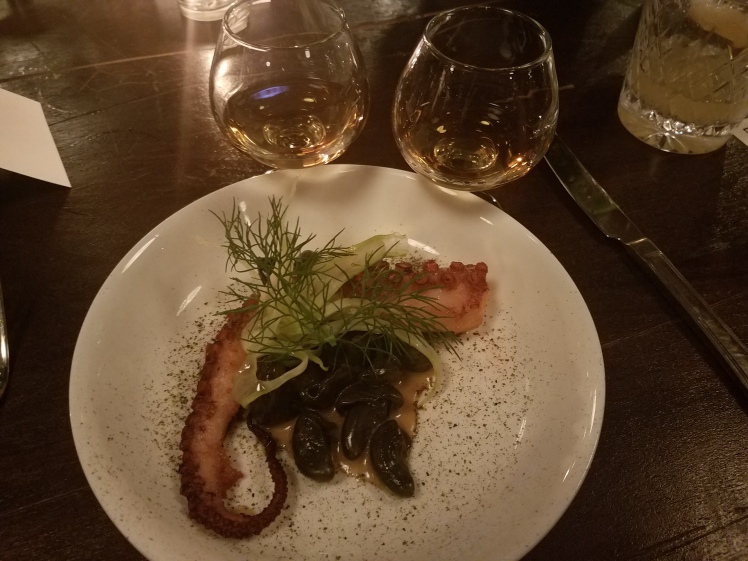 Cheers to the Dewar’s family that not only educated, and entertained, but fed me with the meal of a lifetime. Cheers to Gabriel Cardarella, Ryan Lago, and Chef Michael Voltaggio for a spectacular night in Chicago!